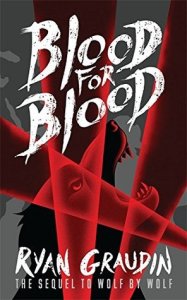 So, what I didn’t realise was that Blood For Blood is the last in this series. It was only a DUOLOGY! I was a little suspicious when it felt like things were wrapping up and I was like ‘wait!’ While I am extremely excited that it meant I could unexpectedly finish another series before the end of the year, I’m really sad that I won’t be off with Yael on another action-packed adventure!

Blood For Blood picks up exactly where Wolf By Wolf left off and it’s been pretty impossible to forget that ending since I read the first book in January! It was such an explosive start to the beginning of my reading year, I’m really sad to see it finished already! The plot follows Yael and Luka as they traverse the world of skin shifters and the shifty German government.

Generally, I feel like this book was lacking something. I desperately missed the race format, because it felt like I was getting through the book really quickly, and the change of setting made everything 100% more exciting. This time, though, the action isn’t split up into hours and days in the same countdown style. It was still action packed after the half way point, but personally I found myself a little bored by the first half. Mainly because it seemed so easy for the authorities to catch Yael because of her tattoo identifier – seriously, you can change the colour of your skin, your whole body type and facial features, but you can’t glamour over a tattoo? I guess the ink is embedded into her body so maybe it’s hard to shift but it seemed a little too easy.

Still, the narrative structure was exciting in the beginning because there was a sort of counting. In book one it’s the counting of the wolves, and it this book it’s the counting of significant holidays and how they differ for the three main characters: Yael, Luka and Felix. I really loved the contrast between them, I think it was a really awesome way of getting to know them better – Luka in particular because he was a bit of a mystery guy in book one.

Pacing wise, I got lost in the middle. There was a lot of running away and being hunted down. We know who the Big Bad is all the time and they’re always right on the good guys’ heels. And Felix is a bit of a grey area now, so I wasn’t sure how I felt about him by the end. And I think the middle focused a lot of trying to explain the experiments to Luka (and to the reader) because Wolf By Wolf isn’t really concerned with the how Yael managed to enter the race to try and kill Hitler, but more of the why. So, it felt more expositional than book one, which is an interesting change from the usual (aka. the reverse.)

There are still a few surprises, and even though I saw the final one coming my jaw still wide open. If we can excuse the monologuing villain cliche then it’s a pretty good game changer and an excellent contrast to Luka’s inspiring speech at the end.

Overall, Blood For Blood is not afraid to play with your emotions. It’s going to frustrate you, it’s going to shock you, and it’s probably going to have you screaming ‘whyyyy?’at the horizon. The ending was so abrupt and I think that’s mostly because I was still adjusting to the fact that this is the last time we’ll see these characters and it feel like not enough time, I thought we were getting a third book, these beautifully complex people have been ripped away from me too soon! I did really enjoy this sequel and I got through it just as quickly as Wolf by Wolf so if you need/ want to finish another series before the end of the year, then I would highly recommend this one! 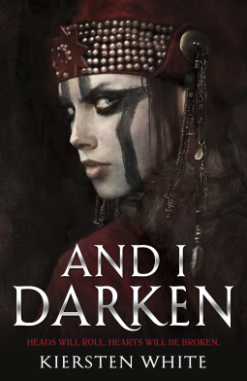