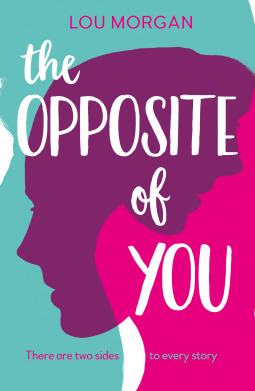 Very recently we read, The Opposite of You by Lou Morgan, and you can read our review here! It’s a fast-paced story about twins, running away and a very special connection. Before we chat to Lou about her debut and writing in general, we have a few  questions for Bex and Naomi about being twins. Ready for Twins Interview Twins? Let’s go!

Bex: One of the camping holidays we went on with our parents, where…
Naomi: Which one?
Bex: The really hot one. In the campsite on the beach?
Naomi: The one where you got bitten by an ant or something and your foot blew up?
Bex: No. Obviously not.
Naomi: That was my favourite one. Right up till the foot thing.

(Bee: haha! Once, when we went on holiday, Maddie’s hand got bitten by a horse fly and it blew up so it looked like a plastic glove water balloon!)

Naomi: Yes. But I can’t tell you when, because Mum might read this.
Bex: What she said. (Sorry, Mum.)

Bex: I kind of like just… hanging out.
Naomi: Hanging out? Nobody says that. Are you Dad?
Bex: Dad says that?
Naomi: Yes.
Bex: Fine. Just being at home, watching Netflix with pizza.

Okay, so, Bex was ridiculously sweet with that one, I could cry! And we have to say ditto to the Netflix and pizza thing! Now we have a couple of questions for the creator of this  pair:

It actually came out of a conversation with my editor, Ruth. I’m always very interested in how human minds work and what makes us who we are: in this case, we were talking about the old theory that twins – and particularly identical twins – have some kind of ‘psychic connection’ between them. We thought it would be interesting to tell a story that explored that from both sides. Personally, I’m not sure I believe it, but it definitely makes for an exciting place to start a story…

(Bee: In case you were wondering, readers, no, Maddie and I cannot read each other’s mind, or feel each other’s pain or say what the other one is doing if we’re five hundred miles apart, or…)

Oh, wow. That probably depends on my mood and what I was doing on any given day. Let’s say… Andrew Scott, because he’s awesome.

Balancing the two different voices, and the need to show how the relationship between Bex and Naomi had changed over the years while keeping it fairly fast-paced was a bit of a juggling act. When it came to the main characters, both of them needed to have their own personalities and voices, but also had to have the kind of similarities you find in any family – not just one that includes twins – and that meant there were a couple of drafts with a lot more background detail around Bex, Naomi and their parents… but in the end we had to cut most of it because it was slowing everything down!

Read everything – and I mean everything – you can. Keep writing, and finish what you start… and don’t be afraid. Most of all, write for you. If you write because you love it – because you can’t not – then whatever happens, whether you’re sharing it with people or keeping it to yourself, submitting it to agents or sticking it in a drawer that makes you a writer. No ‘aspiring’ about it. So what are you waiting for…?

Thank you so much to Stripes Books for letting up be part of this blog tour, and thank you to Lou for answering all our questions! You can add The Opposite of You to your Gooreads by clicking the button below, look at the book on Amazon, by clicking here!

You can check out the previous stop on the The Opposite of You Blog Tour, hosted by maiaandalittlemoore by clicking here!

Whenever we hear about a book with twin protagonists, we’re desperate to get our hands on it. Everyone loves to see themselves reflected in the books they read, and it’s just fascinating to see how authors think of the relationship between twins and if it measures up to our experiences. The Opposite of You was a really great read if you’re looking for a book that understands the strong connection between sisters…but only fuels the fire that twins have been trying to extinguish for all eternity that we can’t literally read each other’s minds. Still, if magical realism is the best way to communicate extreme closeness, we’ll accept it this once! 😉  END_OF_DOCUMENT_TOKEN_TO_BE_REPLACED