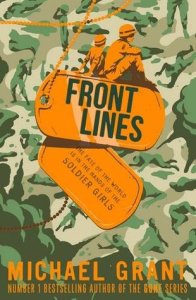 Historical reimagining of what it would’ve been like if women had been allowed to fight in World War II? Where do I sign up? Not for the war (that would be my worst nightmare and this book pretty much solidified that!) but for this sweet piece of fiction. I picked up Front Lines from my local library, and, my goodness, am I glad I did. (It also came highly recommended from my friend Amy who is a HUGE Michael Grant fan.) I had zero expectations because I’ve never read anything by this author but the concept made me think of one of my fave movies ‘A League of Their Own’, a true story about women’s baseball during the war.

END_OF_DOCUMENT_TOKEN_TO_BE_REPLACED

I wanted to read this book for ages. It wasn’t until after I watched the movie, starring Saoirse Ronan, that I really wanted to read it. I’m not going to talk about the differences between the movie and the film, as I don’t want to spoil anyone but if you’re interested in a ‘based on’ movie, instead of a very faithful adaptation, then definitely watch the movie!

So, the premise of this book is that a girl called Daisy is shipped off to the UK to live with her rag-tag cousins because of family conflicts. (More accurately step family conflicts.) The cousins, Osbert, Edmond, Isaac and Piper (Rosoff had to choose the most unusual names for the family!) have been living without adult supervision for a while because their mother is an important figure in the war circuit. It just so happens that Daisy’s UK excursion happens the same time World War 3 does. Go figure.

I really enjoyed the first…third of the book where we got to know the relationships between the characters, and what role they all played in keeping the family alive and together. A romantic relationship forms between Daisy and Edmond (which, if read into, is weird, but Game of Thrones is weirder) and Piper is a little cutie. The cousins easily accept Daisy into their clan and they have a jolly old time together in pre-war country Britain, running around in field and swimming in lakes.

But happiness doesn’t last forever. Obviously, something bad was going to happen. Five kids couldn’t live without adults without someone noticing. So, the five get split up, girls and boys separated and evacuated across the country. Daisy and Piper struggle to acclimatise to their new environment, however, I think they both deal with it pretty well. Not a lot of terrible things happen to them, except witnessing some guy getting his face blown off.

Oh, now it seems the war is serious.

One thing I will say for the film is that it is all much more dramatic. The book could potentially be described as slow paced (and it did take me a while to read, despite in being just over 200 pages) but there is always something going on. I think the book improved once Piper and Daisy were on the move, trying to return to their country paradise. Our survival seemed realistic (although I haven’t had to live in the woods for days), as did their chances of returning home.

I like Part Two of the novel, which offered some closure and a conclusion to the story, ending with ‘that’s how I live now’, so you really understood where the title came from! All the characters had personality and everything felt somewhat resolved with as little heartbreak as possible. For a debut novel, it was fantastic. I would definitely read this again, which is the highest of praises. Overall, I’d give this book 4 stars, the fifth star removed as I was expected more, but that’s what comes with watching the movie first!