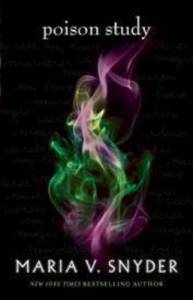 If you watch our videos, you probably know that Bee absolutely adores ‘The Chronicles of Ixia’ series and will happily call Yelena from the ‘Poison Study’ quartet her favourite female character. So, I thought it was about time that I saw what all the fuss was about. Boy, was I pleased with the result! ‘Poison Study’ is unlike anything I’ve ever read. Usually, when I’m reading a book, I notice multiple similarities with something else. I think it helps that I haven’t read much of the high fantasy genre, but after this, I’ve very excited to read more of Bee’s favourite books!

Plot and Pacing
So much plot. So much. The blurb does not do it all justice.
First of all, Yelena is a murderer and due to the Codes of Behaviour, she has to be given the opportunity to be the Commander’s poison taster. This could result in sudden death, but it’s much better than being hanged. In the first quarter of the book, Yelena has to learn the art of poison tasting, aided by Valek, the Edward Rochester to her Jane Eyre. The description of taste and flavour was excellent, as was how the different poisons could kill you. For what seemed like a pretty easy job, trying to identify the essence of blackberries was incredibly difficult.
But Yelena also had to deal with a bunch of other stuff, not just her life threatening job. There was a lot of conspiracy in the castle, and people that wanted her dead, especially the evil father of the boy she murdered (for good reason!) No one can trust her, except Valek. What a great guy. I’ll talk about him later.
Then, there’s this side plot about magicians in Sitia, south of Ixia. Magic is illegal, but Yelena discovers that….well,. just look at the title of the next book.
In general, the whole thing was well placed. There was always something going on. I loved the moment when Yelena was darting around the castle, and the woods and the festival, beating up horrible men and trying not to die. I couldn’t put the book down!

Characters It would be pretty easy to call Yelena a strong female character, but that just feels like such a generic term. Yelena is not strong just because she has to be, but because she always was. Her situations demanded that she rebel and stand up for herself. She’s strong in a physical sense, learning to defend herself, but she’s also strong emotionally, too. I think there’s only one moment in the book where she doubts herself morally. It was so refreshing to read about a character that had so much courage in her convictions, who didn’t have to be consoled by everyone around her. I understand with full clarity why Bee calls Yelena her favourite female character: the girl deserves the title, especially when you find out what her life was like before being a poison taster and what things she had to overcome.
As for the minor characters, I didn’t know who to trust. They all seemed to be double crossing one another, or working for the enemy, or a friend of the enemy. But, when Yelena found true friends in Janco and Ari, it was easy to love them. There’s something so rich about all the characters in this book, something about them that requires looking beneath the surface.

Romance
Let’s just talk about how cute Valek and Yelena are as a couple. They’re like Rose and Dimitri: you’re rooting for them the whole way though, even though there are things in the way of their epic romance. It’s all subtle. Yelena only finds out that Valek has feelings for her by comparing herself with the previous poison tasters.
Valek moved her to stay in his suite, for goodness sake. He loved her from the beginning. He was protective, but not overbearingly so. He trusted her (admittedly towards the end) and showed her compassion and mercy that she hadn’t previously experienced.
I ship them so much, and look forward to their romance progressing in the later novels.

Overall, I would give ‘Poison Study’ 4.5 stars. It was so close to perfect! There were so many twists and turns in the plot that I didn’t see coming, but the reason why this isn’t a five star book was because of the predictability element. As the book progressed, I managed to piece things together myself, before they were revealed. Not to say the big plot twist wasn’t exciting!
I very much look forward to reading the next books in the series, as Yelena is way more than just a poison taster.