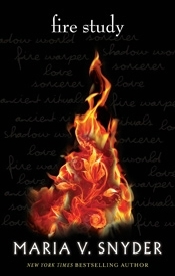 There is no doubt that this was an epic finale to a trilogy. Yelena really did come in to her own, and harness the power she possessed since ‘Poison Study’. However, I must admit that ‘Fire Study’ was my least favourite of the series, even though it was still excellent and to say ‘least favourite’ makes it sound a lot worse!

Okay, first of all, this was the epitome of Yelena’s quest. She’d put of adventuring with Moon Man for a whole book, and now she had to face the spotlight, or more aptly, the shadows in order to complete the final steps of her journey to self discovery. But, I felt myself being not as drawn into the world as I was once. Instead of being in either Ixia or Sitia, Yelena moves between the two. I loved the element of travel throughout, but for her not to be in a resolute location made it a little hard for me to focus. (But, you can instantly tell a good fantasy book if it has a map!)

A lot of what happens in ‘Fire Study’ has a battle theme. Yelena must be strong. Yelena, who is prone to a good old bought of self-sacrifice, had to battle her demons. Although the action and fighting has been a staple throughout the series, I’m not really one for battle scenes. (I know, I don’t really understand why I like Percy Jackson if this is the case!)

I feel that ‘Fire Study’ did a lot to prepare readers for Opal’s entrance into the world, with her own trilogy. I’m very much looking forward to reading what happens to her, as storm dancing and glass making seems a world apart from Yelena’s magical training.

Something that makes these books so impressive is the amount of planning that must go into them. I couldn’t keep track of how many times characters switched from the good to the bad side, and whether or not I could trust the Master Magicians…or pretty much anybody! It almost felt like ‘Game of Thrones’ in that you better not get attached to anyone, otherwise you might be disappointed with their allegiance! I think the constant change of who Yelena could trust kept the story interesting, but stretched my patience after three or four times.

Overall, ‘Fire Study’ was an excellent conclusion. I am now in the possession of ‘Shadow Study’ and cannot wait to see where Yelena’s story travels to next in her latest quest.

One thought on “Review: Fire Study by Maria V. Snyder”