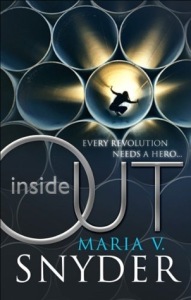 Inside Out and Outside In by Maria V. Snyder
Genre: Sci-Fi, Dystopian
Published by: Mira Ink
Format: Paperback
Rating: ★★.5

I’ve made it my goal this year to try and read all of Maria V. Snyder’s works. It’ve been an avid reader of her Study series for a really long time, and her foray into dystopian sounded like exactly the kind of thing I would like. In a world were people are separated into Upper and Lowers, where the Lowers look after everyone by doing the jobs no one wants to do, we follow Trella, a scrub, who just might know how to get people to the elusive Outside where they can’t be controlled by an oppressive society run by the Controllers.

This series takes so many twits and turns! In some sense you could probably just get away with reading the second book, Outside In, because Snyder does an incredible job summarising the plot of the first book in five pages, but where would be the fun in that? The Insiders Duology isn’t so much of a dystopian as it is sci-fi, as the end of the first book, Inside Out, reveals that the previously hard to visualise world of pipes and upper floors is actually a space ship and suddenly everything makes sense! Uppers and Lowers, like the upper and lower levels of a ship, why didn’t I think of that sooner?

The world building is well paced – the descriptions of the pipes and sections is confusing but other than that it’s pretty clear – but because of the mystery in the first book about ‘what’s beyond the fence’, as it were, you can’t really understand the size and scale of the ship until the second book. I really loved how the time was measure in weeks instead of years and months, it definitely added a futuristic vibe that most sci-fis try and get just by adding new technology.

As for characters, they’re classic Maria V Snyder goodness. The sage young adult who sacrifices himself for his people, the love interest from another part of the society, adorable siblings! You know, all good stuff. Trella’s a pretty strong character to begin with, she’s curious above everything else, but she became too whiny. Trella could even be pretty selfish in the second book, I know becoming the leader of a rebellion and finding out your parents are still alive and your mother’s actually a traitor is pretty heavy stuff, but she was way too interested in exploring the rest of the shop than actually helping the rest of the crew and her friends stop a war with the Controllers and the other ship that joins to theirs.  She simultaneously felt a lot older than 16 and a lot younger than 16.

Also, her relationship with Riley was frustrating. Were they together, were they not? And all the Sheepy stuff was just embarrassing to read. I was expecting their relationship to be like Luke and Glass’ from The 100, but it didn’t deliver.

Can I just say that the League of Sheep or whatever the rebellion was called meant that I never took it seriously. Also, how big was this rebellion, like five kids? The stakes were heightened in the second book, yet Trella left all the action to be dealt with by the other characters who were part of the Council. Could we not have focused more on Logan and his sister who seemed to have the answers to every problem anyway. And was AJ’s death really necessary? Also, I never really understood the Controller’s input anyway and I have to admit that I struggled through the last half of the second book. It just became very confusing and hard to follow. I just wasn’t as gripped as I usually am with her work. The first book is still worth a read, but the second?

I still have high hopes for her Avry of Kazan novels!