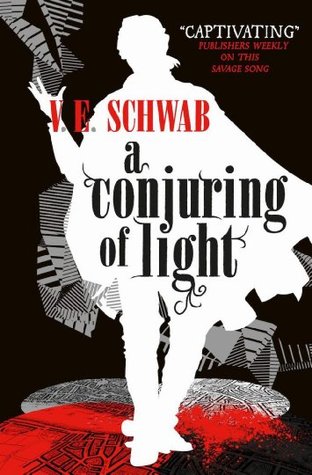 A Conjuring of Light by V. E. Schwab
Genre: Fantasy
Publisher: Titan Books
Pages: 666
Format: Paperback
Rating: ★★★★
Series: A Darker Shade of Magic (#1) | A Gathering of Shadows (#2)
Note: We received this book from the publishers in exchange for an honest review.

I have been in love with this series for a year, and the time has finally come: the release of A Conjuring of Light. I also don’t want this to be a spoiler review and that’s going to be hard so I’m just going to do what we always do on Heart Full of Books when it’s a book we really liked and make a list. I’m going to do this slightly differently and work through some of my thoughts whilst I was reading, let’s go!  END_OF_DOCUMENT_TOKEN_TO_BE_REPLACED

I was unbelievably excited to have my wish granted on Netgalley for Traitor to the Throne because Rebel of the Sands was such an exciting debut, and even though I only gave it 3 stars, I was really pumped for the sequel. Sometimes fantasy series just take a while to get on their feet! I really really enjoyed this book. I feel like I got to know the characters more and learned more about the magic behind the world and the Djinni.

END_OF_DOCUMENT_TOKEN_TO_BE_REPLACED

This is the end of a series that’s very dear to my heart, so before I share my thoughts on Dawn Study, I though I’d give a brief history of my time with the Chronicles of Ixia. So, I first picked up Poison Study for £2 from a bargain bookstore in 2012, and they had all three books in the first trilogy but I decided to only pick up one because I’ve bought a full series and been disappointed before. I took the book on holiday and read it over a few days and I was dying for the sequel. As soon as I was back in England I bought the other books!

Then a year or so later I found the Glass series which is the sequel trilogy in the same world but featuring a minor character from Fire Study and I had those on my shelf for ages before I finally picked them up because Shadow Study was coming out and I didn’t want to be spoiled on anything just incase. So, I whipped through those three books and it felt like coming home. I adore the writing style and the world is so rich, every book is entertaining.

I requested Shadow Study on Netgalley, but didn’t get approved, and then a while after got an email from the lovely Cara at Harlequin inviting us down to their offices for a blogger party where we’d get the chance to actually meet Maria! I can still remember how excited I was getting this email and I can go straight back to the moment I saw it online (I was supposed to be doing History coursework, and whacked the guy sat next to me in my flailing excitement!) I still think that night was one of the best EVER. It was great to meet so many bloggers and Maria herself! I didn’t bring all my books to sign because I thought that would be way to many, but I wish I had now! And I’ve been following the Soulfinders series ever since! It’s definitely been hard waiting a year for each book, when previously I’ve been able to binge, but the wait was definitely worth it!

END_OF_DOCUMENT_TOKEN_TO_BE_REPLACED 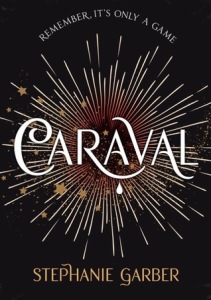 Caraval by Stephanie Garber
Genre: Fantasy
Published by: Hodder & Stoughton
Pages: 416
Format: ARC e-book
Rating: ★★★★.5
Note: We received this book from he publishers in exchange for an honest review.

So today I have the pleasure of reviewing one of my most anticipated releases of the year: CARAVAL!  I knew this was going to excellent as it was being advertised as The Night Circus meets Laini Taylor…I mean? YES PLEASE! Caraval is a truly magical story full of twists and turns that will make you question whether it is all a game or if hearts and lives are really at stake. And the best bit is (drum roll please) at the centre of the story is THE LOVE OF SISTERS. That’s right, I’m going to go ahead and add Frozen to the pitch too. This is the story of one sister doing absolutely all she can to save her sister from herself.

END_OF_DOCUMENT_TOKEN_TO_BE_REPLACED

Just so long. This book was SO LONG. It seriously didn’t need to be, and by the end I was certainly trudging my way through it, however, despite all that it was still my favourite of the trilogy and that can entirely be attributed to the fact that it followed Bitterblue, who is not the Queen of her kingdom. This story takes place a few years on from the events of Graceling, so it’s not really a direct sequel, but you still get to see Katsa and Po, so I’m going to classify this a regular series rather than a companion one, just with a random prequel shoved in the middle there.

END_OF_DOCUMENT_TOKEN_TO_BE_REPLACED

I honestly don’t think I was ready for this series to end. It was one of my most anticipated releases for this half of the year! The Young Elites was one of the first books that I read this year, and I was immediately drawn in by the delicious cast of characters. I’m pretty sure everyone knows by now that one of this series’ USPs is that Adelina is a bit of a villainous protagonist, but not in a fantastical super villain way, more in a ‘this girl’s had a hard life that has forced her to make tricky decisions in sticky situations’. Some people will probably say that’s mellow, but I’ve always loved Adelina, and the bond she has with her sister. And, for me, book two was even better, so I was going in with HIGH expectations, let me tell you.

END_OF_DOCUMENT_TOKEN_TO_BE_REPLACED

And I Darken by Kiersten White
Genre: Fantasy, Re-telling (Alternate History?), Romance
Published by: Corgi Children’s
Pages: 484
Format: ARC e-book
Rating: ★★★
Note: We received this book from the publisher in exchange for an honest review.

So far my experience of Kiersten White’s writing has been the Mind Games duology, which I enjoyed but didn’t think it did a very good job of explaining itself, but she’s a pretty prolific writer and there had been a bit of hype going around about this Vlad the Impaler-as-a-girl retelling and I admit, I got swept along with it too. And I Darken, if you didn’t already know, is the story of Lada (who I guess will grow up to become Lada the Impaler?) and her brother Radu moving from their home town to become part of the Ottoman empire. It’s a fantasy story with a strong emphasis or politics, religion and sexuality, all of which are seamlessly weaved into this bad-ass girl’s life story.

END_OF_DOCUMENT_TOKEN_TO_BE_REPLACED

The Raven Boys is one of those seriously popular books that I still haven’t read. Maddie has read the first three books and now with the recent(ish) release of the season finale, I feel a lot of people are talking about it again. So, I decided to pick it up, mainly because the idea of psychics really drew me in as I’m writing a sort of magical-realism witch story at the moment. As I was reading I kept thinking ‘Oh gosh I’ve got another three of these to go.’ Then, I realised I could just abandon the series even if I couldn’t DNF the book. I mean, everyone told me that nothing really happens but I wasn’t entirely sure to what extent nothing happens. And let me to you: Nothing Happens. (apart from right at the very end when it’s like whaaaat? I’ve skim read too much by now, how did we get here? I’ll have to fill in the blanks myself.)

END_OF_DOCUMENT_TOKEN_TO_BE_REPLACED

Oh goodness. This book was AMAZING. *round of applause* THIS is what fantasy is SUPPOSE TO READ LIKE. No flimsy faux-badass girls, but an actual bad-ass girl. Lila and Kell will steal your heart and once you read A Darker Shade Of Magic you will never want to go on adventures with any one else. I read a chapter sample thing ages ago, but couldn’t really get into it. Now I’ve read the full book I realise that’s because there’s so much world building and gradual character introductions that it does take some dedication before you can really get into it, but if you stick with it you will get out what you put in!

This is not the kind of book you can read quickly, it’s the kind that needs to be savoured and loved till the final page and beyond.

END_OF_DOCUMENT_TOKEN_TO_BE_REPLACED 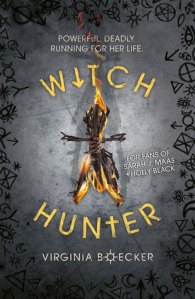 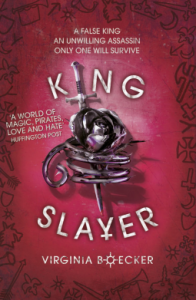 Not quite Holly Black, not quite Sarah J. Maas, not quite Robin LaFevers, and not quite Kristin Cashore but somehow all those ‘not quite’s add up into something pretty special. I was really excited to read The Witch Hunter because I think it was one of the book that came out at BEA last year, an my friend Lea really loves it. It sounded like something I’d enjoy and I did! Then I received the second book King Slayer from the publishers in exchange for an honest review.